A few months in to my internship as Development Officer for the Toledo Institute for Development and Environment (TIDE) and I am beginning to reflect on my time here so far.

TIDE (http://tidebelize.org/) is a community-based NGO with a clear mission:

‘To engage stakeholders in the sustainable management of natural resources within the Maya Mountain Marine Corridor of southern Belize for the benefit of all’.

The following post is a travel log with my initial impressions of Belize, but stay posted for the inside scoop on what TIDE’s been up to in the coming blogs!

Touched down in Belize City late on a Saturday night; having read many a horror story online (never a good idea) of tourists being mugged on the streets, or even robbed in their sleep, I went straight to bed at the Bella Sombra Guest House. Basic, but safe, as reception is locked behind two grates…the murders happen south of Haulover Creek apparently, which is near the bus station, oh good.

View from my guest house… 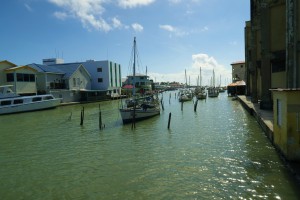 I’d been advised to wait out and get the ‘express’ James bus down to Punta Gorda at about 3.30pm, or PG as it’s affectionately known. Takes about 5 hours (rather than over 7) as it doesn’t stop every 100 metres or so for people to jump on/off (no- really). However, this was misinformation and the express actually doesn’t run on Sunday’s. Not knowing this, I was killing time in the BAKING heat (honestly haven’t been that hot in Belize since as PG is coastal) and tried to get to the museum, which apparently has got some great Mayan artefacts…unfortunately that was also closed…being a Sunday the streets were dead and even all the restaurants were shut! As a Christian country everyone was likely at home or in church. Giving in to extreme hunger I got directions from a helpful Chinese-Creole lady in a corner shop to the only place open apparently- a Chinese take-out (I couldn’t really understand this fascinating accent combo so she drew me a map!). 60% oil, 35% noodles, 5% veg. Classic Belize.

Deciding I rather wait on a longer bus than hang around any longer, I got the long bus down south…wanting to keep half an eye on my large suitcase which was stowed behind the seats, I sat towards the back. The ticket guy ‘Junior’ found this hysterical as apparently only the ‘trouble makers’ sit at the back! I now understand what he means, between Belmopan and Dangriga every man and his dog climbed aboard, so skipping the fare is common. Buses are one of the few things in Belize that are excellent value, at 25BZ for the entire 7 hour ride that’s only 12.50usd. It’s actually illegal to squeeze on so many bodies but the conductors know everyone just wants to get home on a Sunday afternoon and turn a blind eye. The guy I was stuck next to for the first half of the journey was trying to convince me that he’d met Anne Hathaway when he’d worked as an film extra, and that I looked like her…as miss Hathaway is incredibly pale skinned, albeit a beauty, I realised my UK winter skin was going to make me stand out like a moonlit beacon- ‘white gal’. In Hispanic Central American countries since (El Salvador, Honduras etc) I’ve been called ‘Chele’ as a compliment meaning essentially the same thing- back home I’d be praised for a decent tan, funny how we are always intrigued by the exotic!

Punta Gorda, my home for the next few months, is a sleepy fishing town at the edge of The Gulf of Honduras. Most visitors here are heading on to Puerto Barrios/Livingston in Guatemala, and Puerto Barrios is also a short bus ride away from Corinto (the border with Honduras). The Toledo district of southern Belize is predominantly indigenous Maya, which makes for an interesting melting pot with Creole, East-Indian and Mestizo cultures. 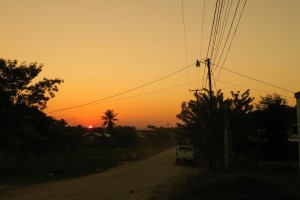 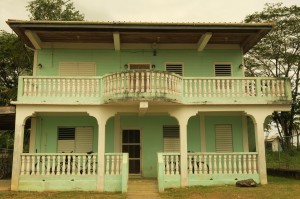 Not much happens here but there is a good market, especially on Saturday mornings. The Belizean diet doesn’t really do vegetables, other than maybe a little coleslaw bathed in coconut milk to accompany your stew chicken, rice and beans, and I was surprised at how pricey the food can be. Bananas are super cheap (maybe 7 for 50p) but other than that expect to pay a premium. I cracked at one point and spent about 5 dollars on a lettuce, opps. This is largely because Belize is such a small country so the majority of food has to be imported.

Tornado the cat- so named because he can turn any minute..! 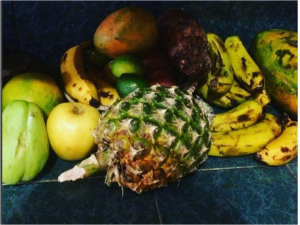 Garifuna drumming in the square

The happy trade off is that subsistence farming and small population has allowed an impressive 60% of Belize to remain forested, unlike the neighbouring countries. Parts of Guatemala have been akinned to looking like the wildwest, and in Honduras large areas of crop monocultures are essentially controlled by a farming ‘mafia’ with links to the narcotics trade. 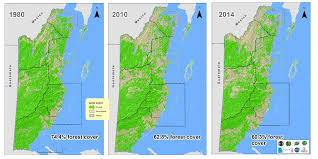 It’s not all rosy in Belize however, land conversion for agriculture is expanding, and as a proportion of the geographical space at an alarming rate. Forest cover has decreased from over 85% in 1980, to approximately 65% in 2010, and now 60% in 2014 (Ya’axche Conservation Trust, 2015). Traditional Slash and burn can be detrimental to soil condition and may contribute to an increased amount of wildfires. In addition, two Menonite communities (seem similar to the Armish to me on a surface level) have a monopoly over large-scale agriculture, and in particular dairy. They have fairly unsustainable farming practices (cows or rainforest- take your pick), and as extremely traditional communities they have resisted outsider influence. There is evidently a need for land-planning and greater enforcement of forestry policies (many of which are actually very progressive for Belize). The Ya’axche Conservation Trust, another NGO down here in PG, is working on these issues, see their paper for more details: http://www.yaaxche.org/files/articles/belize_forest_super_power.pdf

With lessons learnt the hard way from her less fortunate neighbours, Belize is now in the position to do this right, and ensure that forest resources and watersheds continue to provide for her people. 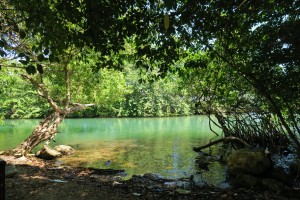